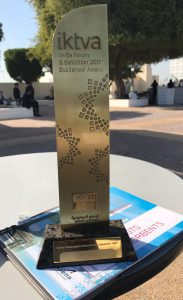 “Best SME’s Excellence Award” was given to a company that demonstrates the highest accomplishment and achievements of being a successful SME. The award has been granted based on the SME’s efforts in Technology Transfer, Innovation Environment, Saudization Development, and Saudization Rate.

IKTVA third anniversary which titled “IKTVA SME’s Forum and Exhibition 2017” highlighted the central and vital role of small and medium size enterprises (SME’s) Sector within IKTVA program, which aims to establish a supply system that relies on local resources in line with international standards to maximize local content to reach 70% by 2021.